Today, the City of Calgary’s Transportation Department will present to the Transportation and Transit Committee on issues related to the yet-to-be-constructed West and Southwest Ring Road projects. As it happens, today also marks an important date in the history of the ring road. It was exactly 60 years ago that the Province of Alberta first announced plans for what would eventually become the Southwest Calgary Ring Road.

On Friday, November 18, 1955, the Calgary Chamber of Commerce held a meeting at the Palliser Hotel in downtown Calgary. Speaking at the event was Social Credit MLA and Minister of Highways Gordon Taylor, who provided a summary of the Province’s 12-month plan for highway projects in the Calgary area. 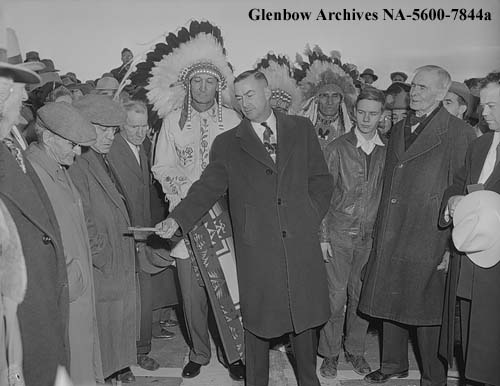 Among the projects discussed at the meeting, including a forerunner of the Deerfoot Trail and errors made in planning the new Trans-Canada Highway through the Stoney First Nation reserve without consulting with the Nation1, was a new bypass road in southwest Calgary. This “hitherto unannounced project for the Calgary area” would provide a connection between the south and west sides of the city. “Once the Trans-Canada Highway is built… a by-pass road to connect the Banff and Macleod Trails will be built.”2

Initial reports only speculated on the precise location of the new bypass road, though the Calgary Herald soon reported “There are two possible routes for this by-pass. One is along 50th Ave. S. to 24th St. S.W., and the other further to the south and actually going around the southwest corner of Glenmore Dam near Weaselhead Bridge3.” It is this second, ‘outer’ road through the Weaselhead area that would form the basis of the Southwest Ring Road.

The following year the City and Province agreed to combine efforts to study and plan for major roadways along both of the proposed routes, including the outer bypass road favoured by the Province4. By August of 1956, less than 10 months after Taylor’s announcement at the Palliser Hotel, the City of Calgary would complete its first consolidated ring road plan5, which detailed an initial outline for the Southwest Ring Road (shown below in yellow).

After 60 years of planning, 17 Ministers of Highways and Transportation, and nearly a million more residents living in Calgary, the Province is set to begin construction of the Southwest Calgary Ring Road project in 2016. For more information on the early history of the Southwest ring road, read more here, and for information on the agreement with the Tsuut’ina Nation and current plans for the road, see here.

With thanks to Norma Marr at the Calgary Herald.

1 With echoes of the Southwest Ring Road’s relationship with the Tsuut’ina Nation, the Province planned to locate the Trans-Canada Highway through the Stoney Nakoda First Nation reserve west of Calgary in the mid 1950s. When plans were first drafted, the Province failed to consult with the Nation, and the Stoney Nakoda rejected the routing of this highway through their land. It was at the November 18 meeting, over a year after the route through the reserve was unveiled, that Minister Taylor admitted “A great error was made, and I take full responsibility for not discussing the proposed route of the Highway with the Stonys before doing so with other interested parties”. Although the highway was built as planned, compensation and settlement of the issue with the Nation would not be reached until the 1970s.