In my previous article (found here) I wrote about the design of the Southwest Calgary Ring Road, and included the road diagrams. Those diagrams showed the ‘Ultimate Stage’ of the road, which showed the road as it would be once fully built out, something that would happen only once Calgary’s population reached the 2.1 million mark. However, they do not represent what would initially be built in the short term if this road becomes reality. This article covers the ‘Stage 1’ or ‘Opening Day’ design for the road that would be built if (or when) a deal is reached.

Focus Engineering designed the road from about 2005 to about 2008, and did so with on behalf of the Province, with input from the City of Calgary, the Tsuu T’ina and stakeholder groups. The final road design is contained in the final Functional Planning Study (FPS) document.

The following diagrams are of the ‘Opening Day’ stage of the Southwest Calgary Ring Road, taken from the Functional Planning Study. The number in the circles on the road indicate lane count. Please click on the images to see a much larger version. (Note the direction of North, as the orientation changes from diagram to diagram). 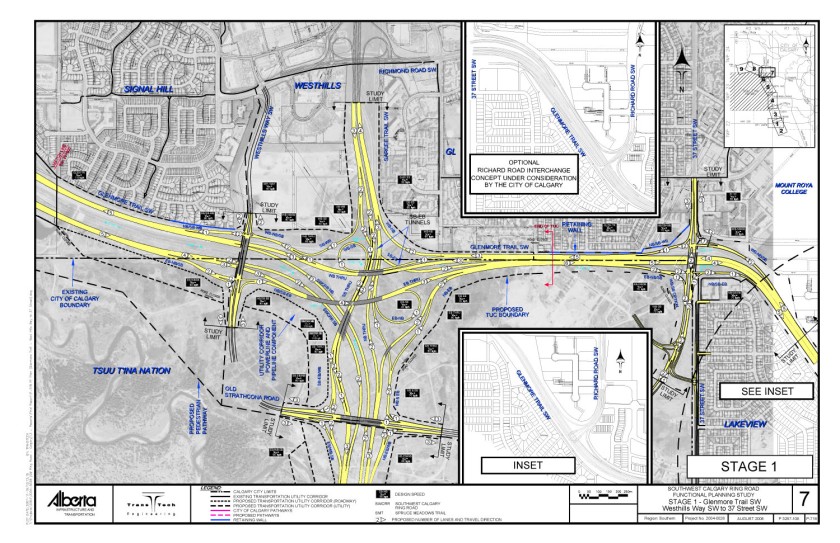 Sarcee Trail South across the Elbow River. It is interesting to note that while the current build of the rest of the Stoney Trail is currently at 4-6 lanes, the section crossing the Tsuu T’ina reserve would be almost entirely 9 lanes.