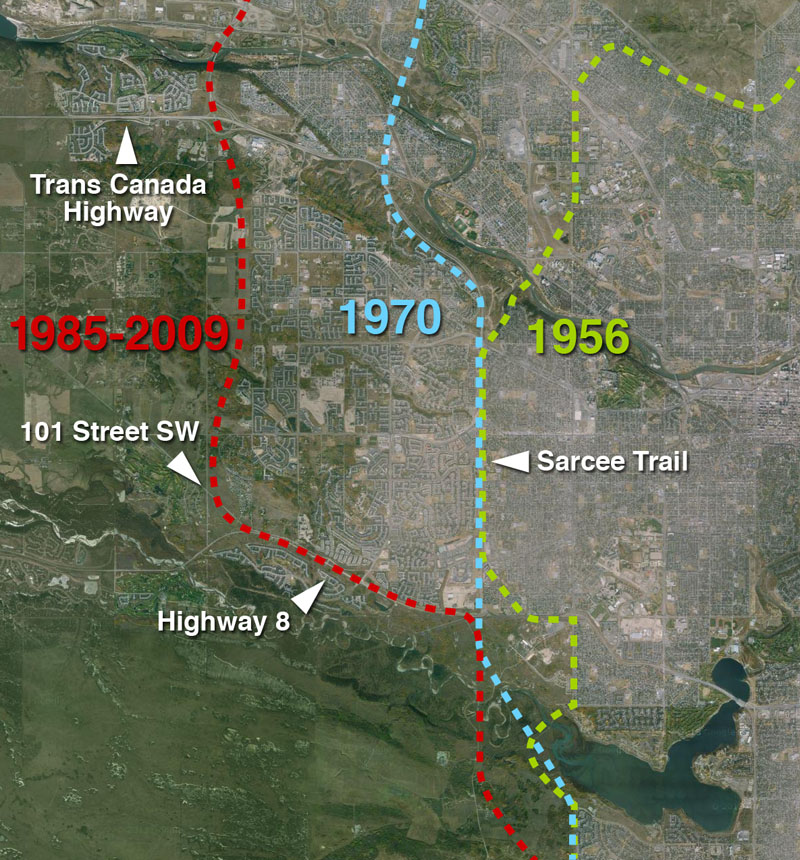 Though the route of the southwest ring road through the Tsuut’ina reserve has in recent years garnered the most attention of the unfinished portions of Calgary’s bypass network, there are actually two additional pieces of infrastructure needed to complete the ring. Aside from the south leg, which extends the road to Macleod Trail in the south, there is also the West Calgary Ring Road, defined as the portion of the road that connects the Trans Canada Highway to Highway 8. This is the piece that I will cover here. 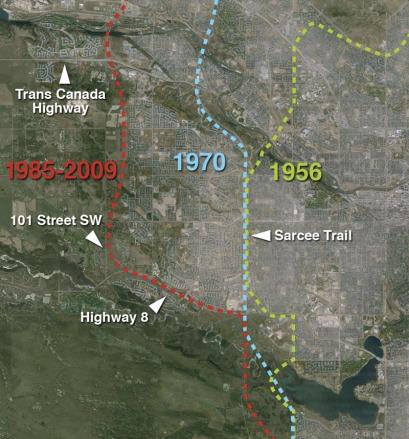 The earliest complete plans for a ring road around Calgary, dating from 1956, plotted much of the western leg of the circuit along the 53rd street SW corridor, better known today as Sarcee Trail. While the route to the north and south of this leg would undergo revisions, this western portion would remain largely unchanged for nearly 30 years, and the road would continue to be planned along the Sarcee Trail corridor until the mid 1980s. END_OF_DOCUMENT_TOKEN_TO_BE_REPLACED

In my last post, I talked about the road design that was part of the 2009 proposal, which was eventually defeated in a referendum of Tsuu T’ina members. While this design formed a large part of the 2009 agreement, the details of that agreement are equally as important when it comes to understanding the history of the road. By all public accounts, the reasons why many members of the Tsuu T’ina voted against the 2009 deal were contained in the details of this agreement.

Soon after the deal was rejected by a vote of about 60.5% against, Tsuu T’ina Chief Sanford Big Plume made comments that the Tsuu T’ina were interested continuing negotiations. While stating categorically that they were not asking for more money, more land or a different route, he did identify a few details of the agreement as being part of the reason the vote failed. Rather than rejecting the entire agreement, he implied that the Nation had voted against certain clauses that were unacceptable. While the Nation were on record as wanting to continue the negotiation process (the deal was only ever put to a vote that one time), after the rejection the deal was declared dead by the Province.

Before we look at the details later identified as needing revision, lets look at what the agreement actually contained: END_OF_DOCUMENT_TOKEN_TO_BE_REPLACED

In my previous article (found here) I wrote about the design of the Southwest Calgary Ring Road, and included the road diagrams. Those diagrams showed the ‘Ultimate Stage’ of the road, which showed the road as it would be once fully built out, something that would happen only once Calgary’s population reached the 2.1 million mark. However, they do not represent what would initially be built in the short term if this road becomes reality. This article covers the ‘Stage 1’ or ‘Opening Day’ design for the road that would be built if (or when) a deal is reached.

Focus Engineering designed the road from about 2005 to about 2008, and did so with on behalf of the Province, with input from the City of Calgary, the Tsuu T’ina and stakeholder groups. The final road design is contained in the final Functional Planning Study (FPS) document.

The following diagrams are of the ‘Opening Day’ stage of the Southwest Calgary Ring Road, taken from the Functional Planning Study. The number in the circles on the road indicate lane count. Please click on the images to see a much larger version. (Note the direction of North, as the orientation changes from diagram to diagram). 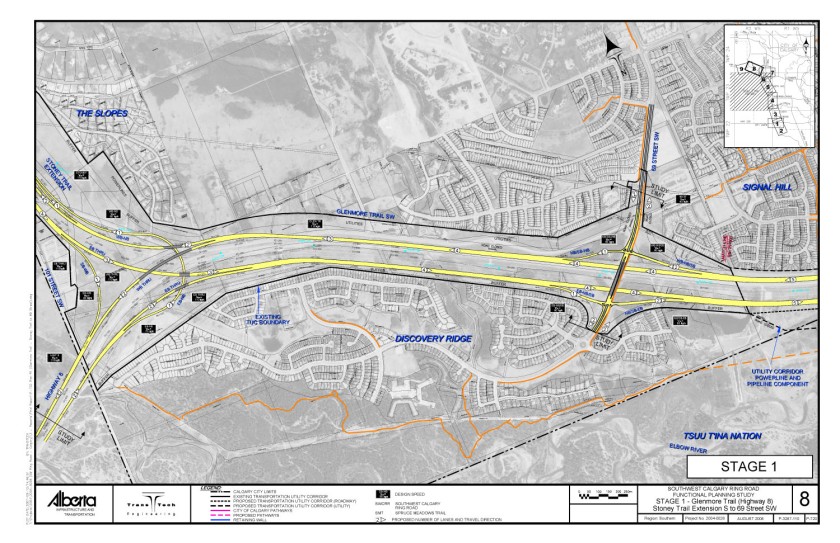 END_OF_DOCUMENT_TOKEN_TO_BE_REPLACED

The 2009 Southwest Calgary Ring Road plan was the culmination of not just 5 years of study and negotiation, but of decades of transportation plans. While the negotiations were rejected by the Tsuu T’ina in June of 2009, that agreement will form the basis of the current negotiations. Both parties have stated that while the terms of the agreement need work, the road and alignment would not change in the renewed negotiations. But what exactly did the plan entail?

The 2009 Plan was initiated in 2004, with the signing of an ‘Agreement in Principle’ by Premiere Ralph Klein and Chief Sanford Big Plume, followed in 2005 by the signing of a ‘Final Framework for Infrastructure’. This Framework agreement set the stage for the Province to begin the work of determining a route, planning the road and negotiating for the land required.

While the design plans for most of the Stoney Trail (the Calgary Ring Road) calls for a road of 2-4 lanes in each direction (4-8 lanes total) the Southwest portion was designed to accomodate 16 lanes. The Tsuu T’ina agreed that if they were to sell land for a road, it would be done only once. Since the Province have long term plans for a second ‘Outer’ Ring Road around Calgary, and with no further opportunity to purchase more land from the Tsuu T’ina, the Southwest portion was to be designed to accomodate not only the 8 lanes from the current Stoney Trail Ring Road, but an additional 8 lanes for a future, ‘Outer’ Ring Road (shown below). The ‘Opening Day’ scenario details a road of 4-6 lanes, while the ‘Ultimate’ stage, not expected to be built for 50+ years, details a road of up to 16 lanes. 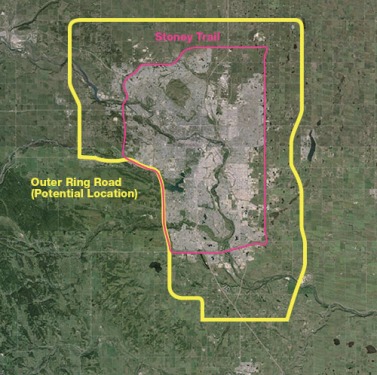