In this series of four articles, I want to look at the history of the entire Calgary ring road system, not just the southwest portion. Though the Calgary Ring Road System we know today (Also currently known as Stoney Trail or Alberta Highway 201) has been largely constructed only in the last decade or so, its origins can be traced back to the 1950s and 1960s.

Ring road plans from 1953-1957 originated the concept of a regional bypass road network, and in 1959 portions of that plan were incorporated and approved in Calgary’s first ever transportation plan.

The concept of bypassing the Trans-Canada Highway traffic off of 16th avenue N and onto a more northerly road had been discussed essentially as soon as the Trans-Canada Highway was first routed through the City, and on September 19 1963, Alberta Highways Minister Gordon Taylor announced to a group of North Hill business owners that the Alberta government intended to build a northwest bypass west of Bowness. This section, the northwest bypass, would eventually become the precursor to the first section of the Calgary ring road to be built. However, these outlines were generally smaller piecemeal solutions to local transportation needs, and the planning had not yet reached the point of being a comprehensive design for a regional highway. That work would begin in the late 1960s, and progress in earnest in the 1970s.

The mid 1950s saw increased discussion between the City and Province about modernising the road network in Calgary, and that included planning freeway-standard roads for the first time. The 1956 NcNally Report on the development of Calgary also contained a section that recommended that bypass roads and bridges outside of the city be built and maintained by the Province.

The City of Calgary released a draft of their first preliminary outline for Calgary’s road network in 1956 (initiated in 1953), and while this outline was not adopted by City Council, much of it was later incorporated into Calgary’s first ever transportation plan, the 1959 Calgary Metropolitan Area Transportation Study. The 1953-1957 ring road plan involved the creation of three concentric ring roads: An inner road that encircled the downtown, an intermediate ring that traversed the outlying suburban development at the time, and an outer ring road ‘Parkway’; a divided, limited-access highway on a 200 foot right-of-way that would encircle the entire city, including lands that would not be developed for decades to come. The map below from 1957 shows the three roads: 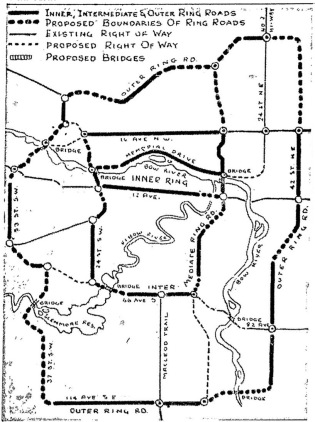 The Inner Ring was formed by Memorial Drive in the north, 11th and 12th avenue S in the south, Crowchild Trail in the west and 15th street E in the east, with of the roads built to a freeway standard. Much of this road system, despite utilising existing roads, was never built to the standards, and for the uses, envisaged in the 1950s. The Intermediate Ring was largely constructed as planned, apart from the NE corner. The route was formed by 16th avenue N in the north, Glenmore Trail in the south, Crowchild Trail in the west and 15th street E and Blackfoot Trail in the east. The Outer Ring was the first regional ring road concept for Calgary. It shares none of the route of the current Stoney Trail, although it touches two of the same intersections, both in the southwest at Glenmore Trail/Sarcee Trail, and at 37th Street SW/Anderson Road. Formed largely by John Laurie Blvd in the north, Anderson Road in the south, 37th street W, Sarcee Trail and Shaganappi Trail in the west, and an unrealised road along the 42nd Street E alignment in the east.

The plan was ultimately modified, and significant portions were included in the 1959 plan (shown in the map below). Most of the outer ring would be retained in the 1959 plan, set out as a series of separate but connected roads. The study also contained the first approved plan for a major crossing of the Elbow river in the Glenmore area. This is the first time a Sarcee Trail extension is shown and approved to go west of the reservoir to serve south Calgary.

The transportation section dealt with the long range planning for the highway and road systems for the Calgary area, including the freeways previously planned for a ring road system. However, while some aspects of a bypass network were retained, especially in the northwest and southwest, other aspects of the ring road plan were dropped altogether, including the direct integration of an east section with the north sections. The map above highlights the 1959 route where it was retained. Below is part of an article in 1963 on the Sarcee Trail, from Bow Trail to the Trans-Canada Highway. Constructed by the Province, Sarcee Trail, along with the Glenmore Trail, formed the southwest segment of the intermediate ring road.

Though many freeway and expressway sections were retained from previous studies, the fully-integrated ring road concept seems to have been somewhat neglected. The integrated ring road system would have to wait until the next full transportation study in 1967.

In 1967, the City of Calgary, with transportation consultants Simpson and Curtain of Philadelphia, produced and adopted the Calgary Transportation Study, which proposed and outlined perhaps the first ring road concept that we would recognize today (as well as originating the concept of rapid transit for Calgary). It fully revised and expanded on the 1959 plans for the ring road, retaining only the Sarcee Trail/37th street section in the Southwest from the Bow river to Anderson Road. Though the 1967 road plan may appear the same as our current Stoney Trail at first glance, the modern route has been enlarged from this plan, having been moved out from the city by 1-4km in most sections.

The 1967 plan set out the following route (Highlighted in green on the map below): The north section is what is now Country Hills Blvd, while the south section is Highway 22x. 37th street and Sarcee Trail (including the undeveloped Bow river crossing) forms the west section, and 68th street E fills out the east section. The road was planned as a divided, limited access ‘Freeway’ on a 300 foot right-of-way. 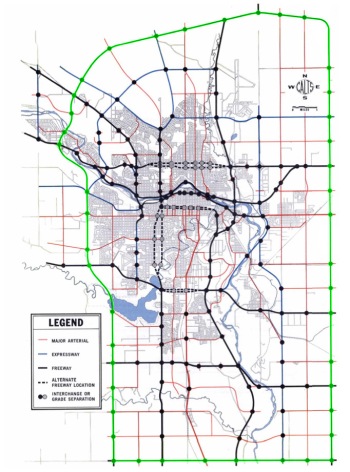 In 1970, the Provincial Government commissioned a study of the road network in the greater Calgary area, and one aspect of the report was in regards to a ring road system. The proposed route for the road was largely the same as the route put forward by the City of Calgary three years previously. 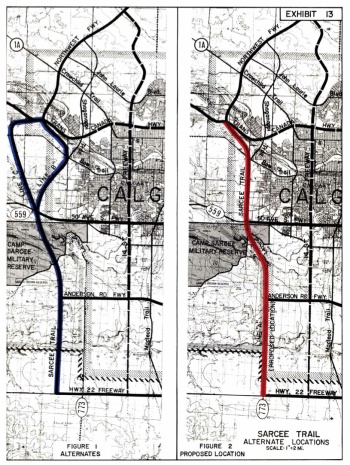 This plan is notable for being the first official study to show the Southwest portion of the road to potentially go through Tsuut’ina lands. Although the recommended route follows the previously planned Sarcee Trail extension, it also details an alternate route located approximately 1km west of the 37th street SW corridor. The final proposed location remains entirely within City and Provincial lands, and Tsuut’ina lands are ultimately not required by the plan.

The southwest portion of the ring road in these early plans is interesting, especially when looking at its location. The first ring road outline in 1956, which was never accepted or endorsed by any level of government, showed a crossing of the Elbow river along the 37th street alignment; something that would not again be explored officially until the ‘Plan B’ route options of 2011. By 1959, that route was dropped in favour of a crossing alignment that extended Sarcee Trail directly south from Glenmore Trail.

All of the proposed Sarcee Trail extensions in these early plans showed an alignment that headed south from Glenmore trail, bisecting the Harvey Barracks and then southeastwards through the Weaselhead. While this Weaselhead alignment would fall out of favour in the 1970s, it remained the proposed option for several years. This alignment ensured that the entire road corridor was contained within City or Provincial land, and would not require land from the Tsuutina.

By the beginning of the 1970s, both the City and Province had outlined a robust regional highway system in the Calgary area, however, no concrete steps had been taken to actually design the road or protect the land required. In the coming decade, all of that would change, with functional planning studies initiated, the full (if not final) ring road network would be planned, and legislation would be initiated to protect and purchase the corridor required.