1996 is the earliest public mention of plans by the Tsuu T’ina to develop a casino, the same year the Harvey Barracks was closed, and a full decade before the land was cleared and returned to the Nation. The original plans called for a casino, hotel and entertainment complex, and on June 30, 2004, the Nation voted to proceed with the Casino portion. Groundbreaking on the 84,000 square foot casino was held September 14 2006, and was open to the public in December 2007. The casino was controversial from the very beginning, especially in regards to access.

The picture below shows the access as it was in 2007, before the new Glenmore Trail / 37th Street SW Interchange was constructed. 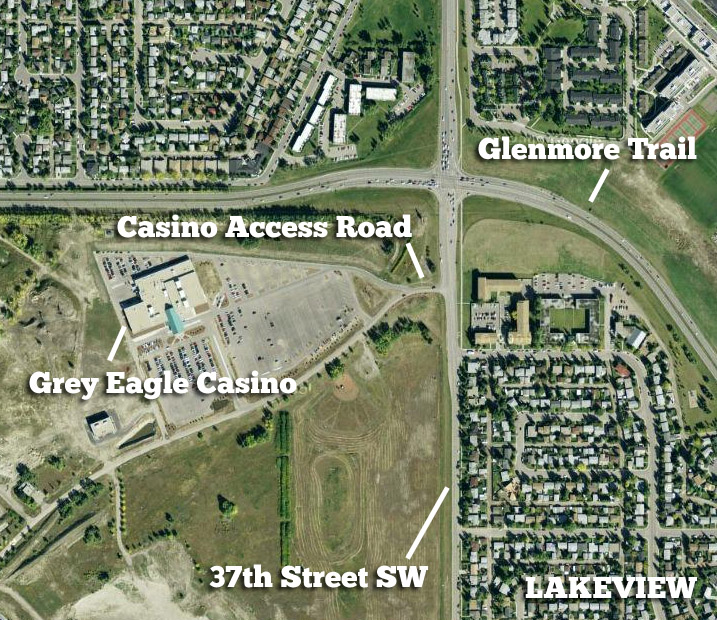 The City of Calgary always held that the Casino and the Ring Road projects were inexorably linked; their position was that the Casino (and the rest of the Masterplan development) could, in the long run, only be served via the ring road and its access roads. Without a ring road, the only way to get to the casino was via 37th street SW in Lakeview. This access point (long considered temporary by the City) was at an intersection on Glenmore Trail that was already at failure due to high traffic. 37th street SW is also only a residential feeder, and the City thought it unsuitable for access to a development of this sort in terms of capacity. The City noted in 2004 that the traffic simulations submitted to the Alberta Gaming and Liquor Commission by the Nation in support of their application was based on a widened Glenmore Trail (which, now 10 years later, has still not materialised) and out-of-date traffic figures.

The City’s position was that if a ring road was not built on the Tsuu T’ina lands, then the only alternative was to build the ring road down 37th street SW. If this was done, then the access road at this location would by necessity be closed, as a high-speed, limited-access freeway could not physically accommodate a small feeder road at that location. Rather than being a bargaining chip or an act of petty revenge, as some have suggested, the closing of the access road to the Casino would seem to be an unavoidable result of having no other viable corridor to build the ring road. From the beginning, the City warned the Tsuu T’ina that access to the casino from 37th street SW was temporary, and that they could not guarantee it remaining open should road negotiations fail. 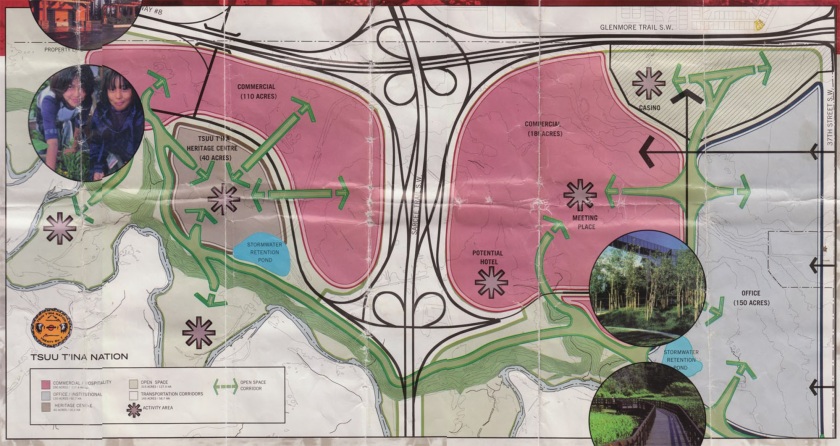 The Tsuu T’ina on the other hand viewed the Casino and the ring road as two separate projects. While they imply that the majority of the Masterplan (shown above) is dependent on the ring road going ahead on their land, the Tsuu T’ina considered 37th street SW as not only an acceptable access road to the casino, but also a legally guaranteed one. 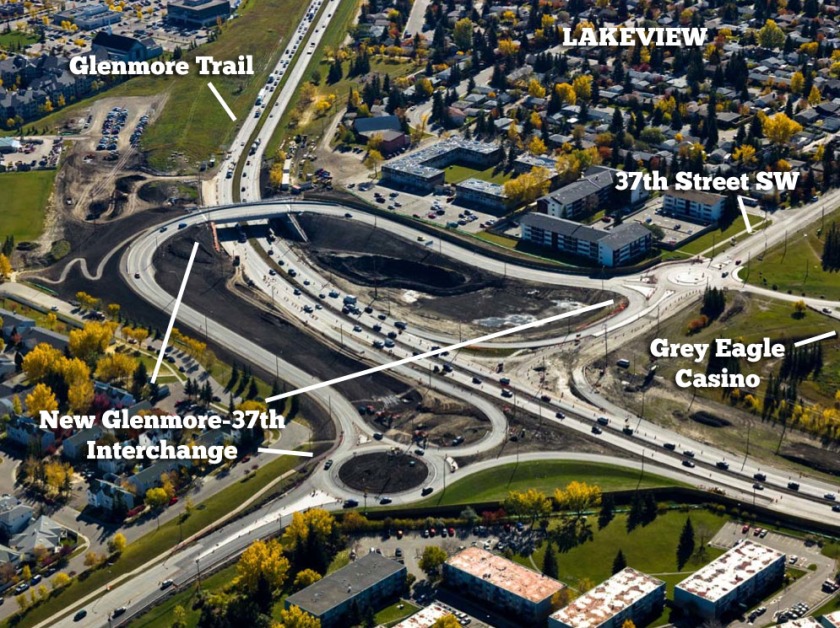 This issue came to a head in 2009 when the negotiations for the road failed, and the City began improvements to the intersection at Glenmore Trail and 37th street SW. When the first reports came out about the new interchange (shown above), it was reported that the access to the casino would be closed to accommodate the new road layout. The Nation immediately wrote to the City of Calgary and stated that “any interference by the city of Calgary of Tsuu T’ina Nation’s rights to enter and leave its lands at any point along Tsuu T’ina Nation boundaries constitutes a breach of our rights under Treaty No. 7”, and that they would consider legal action. The City held that the only access to the reserve they were legally required to maintain was at Anderson road, which remained untouched.

The text of Treaty No. 7 (available here) says nothing about the right to enter and leave reserve lands at any point, thought there may be some later legal precedent that does provide for this. The text also does not stipulate a single, legal access as the city states, though again this might come from a later legal precedent. I cannot find anything to suggest either claim is true at this point, but will update if I find out anything more.

As it turned out, the new interchange actually improved access to the reserve at this intersection, and (apart from poor signage and confusion upon opening) worries about access were unfounded. To this day, access to the casino remains open at 37th street SW at Glenmore Trail.