I have recently had the opportunity to work with the Tsuut’ina Nation-Canderel Development Partnership on some design and communications work, including the website for their upcoming Taza development. I’m pleased to see the launch of the ExperienceTaza.com website this week, which provides information on this transformative First Nations project, located right on the edge of Calgary.

EDIT December 2019 – The first tenant announced for the project is a new Costco, part of “The Shops at Buffalo Run” development located within in the Taza Exchange area near 130th avenue SW.

(For more on the origins and history of this project, see The Road to Development Part 1)

Taza is a series of three commercial development areas, or ‘villages’, that are located on the eastern edge of the Tsuut’ina Nation reserve. From north to south, Taza Park, Taza Crossing and Taza Exchange are connected along a 9km portion of Calgary’s Southwest Ring Road, known as Tsuut’ina Trail where it crosses the reserve. The name ‘Taza’ is a Tsuut’ina word for an expression of amazement, and the development has adopted the tagline ‘Together at Tsuut’ina’. 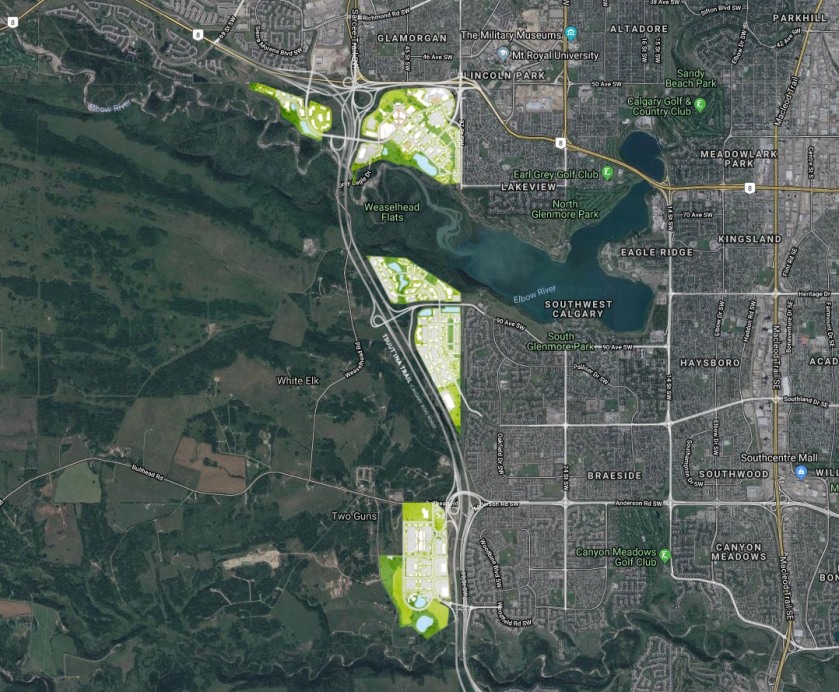 The Taza development is a joint-venture between the Tsuut’ina Nation and the development company Canderel, and represents the culmination of nearly 50 years of economic development and planning by the Nation. For the story on the early years of the Nation’s economic planning, click here.

Click on the maps in the following sections for a larger version of each.

Taza Park is a 530-acre parcel of land located on Glenmore Trail that was previously home to the Harvey Barracks Military base. The ring road bisects Taza Park into two parcels, and the development area extends from the community of Lakeview on the east to Discovery Ridge on the west.

The area is touted as a “dynamic recreation and entertainment destination” and consists of a mix of retail, dining, residential, recreational and cultural amenities. Taza Park interfaces with the existing community of Lakeview with a new lower-density residential area on the west side of 37 street SW.

The plans also feature a ‘pedestrian-friendly Market Street’, and includes a network of cycle paths, parks and artificial lakes and ponds, much of which is located overlooking the Elbow river valley and the Weaselhead area. END_OF_DOCUMENT_TOKEN_TO_BE_REPLACED