I have recently had the opportunity to work with the Tsuut’ina Nation-Canderel Development Partnership on some design and communications work, including the website for their upcoming Taza development. I’m pleased to see the launch of the ExperienceTaza.com website this week, which provides information on this transformative First Nations project, located right on the edge of Calgary.

EDIT December 2019 – The first tenant announced for the project is a new Costco, part of “The Shops at Buffalo Run” development located within in the Taza Exchange area near 130th avenue SW.

(For more on the origins and history of this project, see The Road to Development Part 1)

Taza is a series of three commercial development areas, or ‘villages’, that are located on the eastern edge of the Tsuut’ina Nation reserve. From north to south, Taza Park, Taza Crossing and Taza Exchange are connected along a 9km portion of Calgary’s Southwest Ring Road, known as Tsuut’ina Trail where it crosses the reserve. The name ‘Taza’ is a Tsuut’ina word for an expression of amazement, and the development has adopted the tagline ‘Together at Tsuut’ina’.

The Taza development is a joint-venture between the Tsuut’ina Nation and the development company Canderel, and represents the culmination of nearly 50 years of economic development and planning by the Nation. For the story on the early years of the Nation’s economic planning, click here.

Click on the maps in the following sections for a larger version of each.

Taza Park is a 530-acre parcel of land located on Glenmore Trail that was previously home to the Harvey Barracks Military base. The ring road bisects Taza Park into two parcels, and the development area extends from the community of Lakeview on the east to Discovery Ridge on the west. 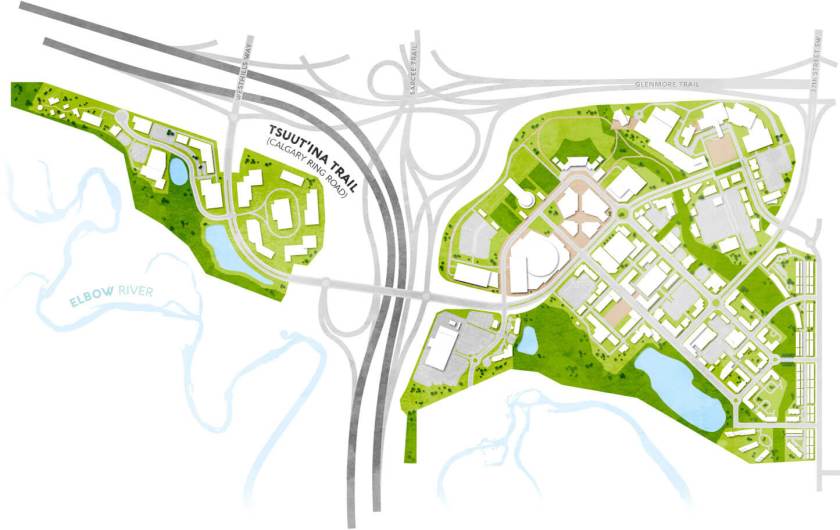 The area is touted as a “dynamic recreation and entertainment destination” and consists of a mix of retail, dining, residential, recreational and cultural amenities. Taza Park interfaces with the existing community of Lakeview with a new lower-density residential area on the west side of 37 street SW.

The plans also feature a ‘pedestrian-friendly Market Street’, and includes a network of cycle paths, parks and artificial lakes and ponds, much of which is located overlooking the Elbow river valley and the Weaselhead area. END_OF_DOCUMENT_TOKEN_TO_BE_REPLACED

Next year, a new development located on the Tsuut’ina Nation reserve is set to be officially unveiled. The project, the result of a partnership between the Tsuut’ina Nation and the developer Canderel, is located along a 10km portion of the Southwest Calgary Ring Road, and is being touted as a transformative combination of retail, commercial, entertainment, health, residential and tourism amenities on Calgary’s doorstep.

Given that the development relies on access from the ring road, known as Tsuut’ina Trail as it crosses the reserve, it would be easy to see the project as a direct result of the construction of this road. However, it’s more accurate to say that the construction of the road is a direct result of the Nation’s desire to develop reserve land on Calgary’s border.

Although the proposed development is certainly a new undertaking for the Nation, the idea of developing land on the reserve’s eastern edge is one that’s been nearly 50 years in the making. The planning for both the road and the developments were initially done independently of each other, with each involved party willing, or even preferring, to proceed without the other. As time went on it became increasingly clear that neither could be completed without the other, and the two projects eventually became inseparable.

The Nation has derived economic benefit from reserve land in different ways over the years, including royalties from oil and gas extraction, land leases, and the sale of surface resources such as timber and gravel. Though important, these sources of income alone have not always provided the growing community with the resources it needed to be prosperous. In the early 1970s the Tsuut’ina Nation sought to create more ambitious economic enterprises, and looked to take advantage of the proximity of the City of Calgary to help make that happen. In recent years those plans have revolved around the Southwest Calgary Ring Road, though this was not always the case.

In 1970, Tsuut’ina citizens Reg One Spot and Arnold Crowchild were appointed to head up a newly-formed economic committee by the Nation’s Chief and Council.1 The committee’s mandate was to explore development opportunities on reserve lands, and to assess the benefits and drawbacks of any such initiatives.

For many years, portions of the Tsuut’ina reserve had generated rent under long-term leases to the Canadian Military. The Nation, however, was now looking beyond land leases. The new committee was not seeking to simply lease empty land to third-party developers, but instead were looking at ways for the Nation itself to become a developer in order to reap rewards larger than rent alone would provide. Arnold Crowchild explained their position in November of 1970; “What the tribe could get from leasing this land out may seem like considerable money, but it is only a drop in the bucket compared to what we could get if we developed it ourselves”.2

Beyond the financial benefits for the Nation as a whole, the ability to develop the land was seen as critical in improving the employment opportunities of Nation members. The Nation’s employment rate was far below that of neighbouring Calgary in the 1970s, with a reported 50-70% of the Nation unemployed, depending on the season3. “The most important thing for us right now is to create jobs for our people. We can only do this by setting up our own enterprises” the economic development team is quoted as saying.4

The east side of the Nation’s reserve, being directly adjacent to Calgary, was seen as an ideal place to explore development opportunities. This portion of the reserve benefits from its close proximity to the city, including access to potential customers and the City’s transportation network, and was viewed as some of the most viable land for commercial development. The relationship between the Nation and local city residents was noted as an important consideration for any potential development, and this relationship was to be maintained by sensitive developments. “[Our developments] would have to be clean industries so we won’t develop bad relations with our City neighbours close-by” said Mr. Crowchild and Mr. One Spot5, a position which would be reiterated by a soon-to-be-released consultant’s report.

In 1971 a $75,000 study was written by Stanley Associates Engineering Ltd.6 in order to help assess the development potential of the reserve. From this report a five-project development plan was created that was intended to unlock the commercial value of the land. This plan called for the development of:

The study also recommended the creation of a new legal body through which the Nation could carry out its development projects. In 1971 Sarcee Developments Ltd. was established, a company wholly-owned by the Nation, with Reg One Spot and Arnold Crowchild becoming its founding directors.7

The last proposal on the consultant’s list, the ‘cottage community’ near Bragg Creek, is arguably the most economically successful of the Nations early development plans. However Redwood Meadows, as this residential and golf-course development is known, is located on the reserve’s west side, and is therefore the development least impacted by the Southwest Calgary Ring Road story. Though Redwood Meadows is deserving of its own article delving into its history, I will not be covering that story here, and will instead focus on developments found on the east side of the reserve. END_OF_DOCUMENT_TOKEN_TO_BE_REPLACED