The Southwest Calgary Ring Road may be the best known provincial road designed to cross Tsuu T’ina land, but it wasn’t the first road sought through the reserve. In fact, it is at least the fourth road, either built or not, that the Province planned to cross the reserve. The three previous road plans, of which only one is operating today (and one  never built), are also related in another way; they were all earmarked at one time or another to be the route of Highway 22.

The Priddis Trail and the Original Highway 22

The road known as the Priddis Trail was not only the first road to be considered for the role of Highway 22, it actually predates the building of that highway by many years. The road was officially established by the Province in 1900 after being surveyed for the first time in 1899. However, the route is even older than that. The Priddis Trail was set out along a much older trail that had been in use by local First Nations for decades, if not centuries. The trail is shown below in 1897. 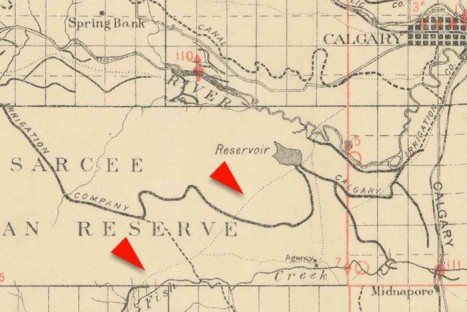