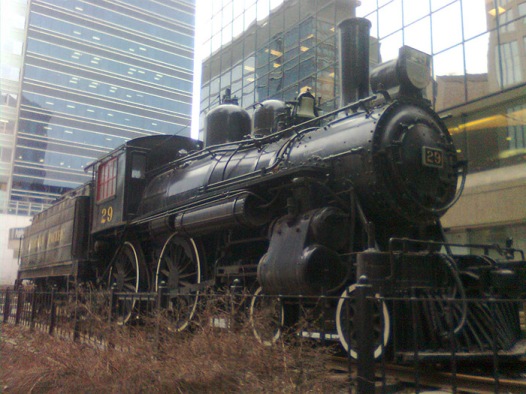 The concept of a Provincial road crossing Tsuut’ina land is a well established one, with two having been built, another shelved, and the Southwest Calgary Ring Road still under negotiations. However, the idea of a railway through southwest Calgary and the reserve might be a little more surprising. Around 100 years ago no less than three Railways were planned to traverse the reserve, lying as it does between Calgary, the southern Alberta coal and oil fields, and the American northwest beyond.

Though the relationship between the Southwest Calgary Ring Road and these railway projects of another century might not be obvious, their stories of infrastructure development, of planned economic prosperity through the ability to transport goods, and of the reserve’s role in potentially providing a path for these projects illustrate a long history of public and private transportation interests in the Tsuut’ina land. It is also worth noting that the Indian Act, which governs the First Nations reserve system in Canada, was amended in 1911 to allow for the expropriation of reserve land for road and railway projects. The plans shown below would likely not have required the permission of the Tsuut’ina to have been built. 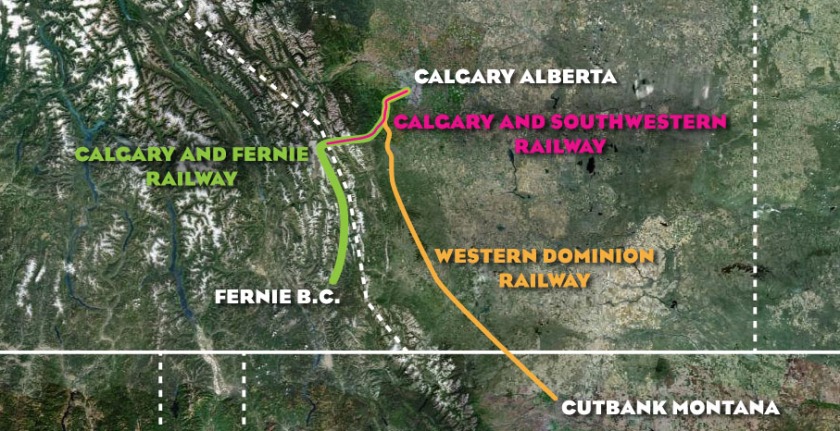 The above map shows the general location of the three lines that had been planned to cross the Tsuut’ina reserve in the early part of the 20th century: the Calgary and Fernie Railway, the Western Dominion Railway and the Calgary and Southwestern Railway.

The Western Dominion Railway Company was founded in 1912 by act of Parliament, but also incorporated the Alberta Pacific Railway which was originally incorporated as the Pincher Creek, Cardston and Montana Railway under a 1906 Provincial charter. 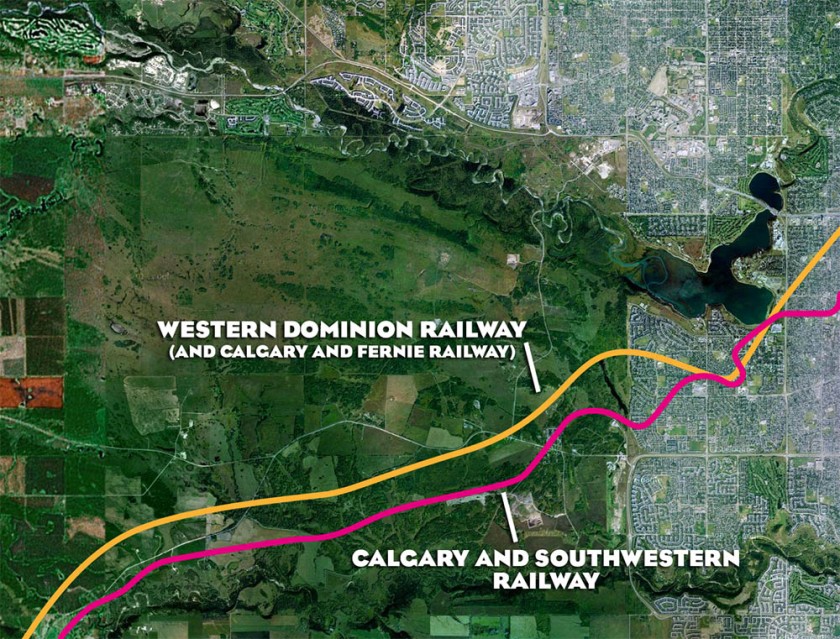 The Alberta Pacific charter granted a line that ran from the international border through Cardston, Pincher Creek, the Turner Valley area and on towards Calgary, while the Western Dominion charter further allowed for the continuation of this line to Edmonton, and eventually to Fort St. John BC. The portions north of Calgary do not feature in later plans for the line, and efforts appear to be concentrated on the original Alberta Pacific portion, from Cutbank Montana, where it would connect with the Great Northern line, to Calgary. This portion of the line was surveyed in 1912, and contained the section through the Tsuut’ina reserve. 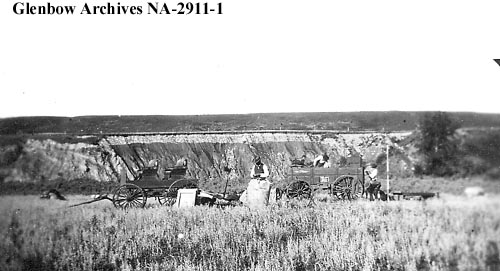 (Glenbow NA-2911-1. The picture above shows a team surveying for a railway, likely the Western Dominion, in the Priddis region just south of the Tsuut’ina reserve, circa 1911)

Though originally financed by capital from New York and London, both the Great Northern and the Chicago, Milwaukee and St. Paul lines were reported to have held an interest in the company. In 1914 the Western Dominion Railway awarded the construction contract for the first 100 miles, including contracts for 4 million feet of timber trestles and 12,000 yards of concrete, and estimates at the time pegged the construction costs at $30,000 per mile. Soon the original commitment of building 100 miles was extended all the way to the international border, and plans were announced to begin construction of the line in Lundbreck, Alberta, where it would be simultaneously extended both north and south towards each end of the line.

Despite these commitments, and the announcement of groundbreaking in July of 1914, the charter was last extended in 1921 and the line was never built.

The Calgary and Fernie Railway Company

The Calgary and Fernie Railway was granted it’s charter by an act of Parliament in 1906, and though founded before the other lines that envisioned the use of Tsuut’ina reserve land, the specific route including plans to cross the reserve were not formalized until 1914, two years after the Western Dominion.

From the outset, the line faced opposition, and was seen by some as part of a coordinated American attempt to ‘capture’ a series of Canadian mountain passes. According to certain Senators on the Senate Railroad Committee at the time, the intention was to divert Alberta wheat and cattle to American ports and companies. The Calgary and Fernie Railway, financed by noted American railroad tycoon James J. Hill, was reported to have been conceived for precisely the reasons raised by the Senate. The new line was envisioned tie into Hill’s Great Northern Railway line, and would provide access to American markets for Alberta resources and commodities, which to that point was served only by East-West railway lines. The question about the flow of goods was further raised when construction plans were revealed; the line was to be built from Fernie towards Calgary, rather than Calgary towards Fernie. This meant that the line would initially be carrying freight from the agriculture- and coal-producing areas of southwest Alberta towards the United States, rather than through Calgary; a situation lamented by at least one Calgary City Councilor at the time.

The route for the railway had been surveyed in 1914, at which point the company engaged the Department of Indian Affairs regarding a right of way through the Tsuut’ina reserve. The plans also raised the opposition of a competing railway. The Western Dominion Railway had opposed a portion of the route for the Calgary and Fernie line because the 18 miles from Millarville into Calgary, via the Tsuut’ina reserve, would parallel their own route. In response, the federal Minister of Railways had ordered that the Calgary and Fernie line was to be given ‘running rights’ over the Western Dominion lines for the final 18 miles into Calgary, providing the Western Dominion built their line before the Calgary and Fernie line reached Calgary. While two railways were set to cross the reserve, it would have been done on a single set of tracks. 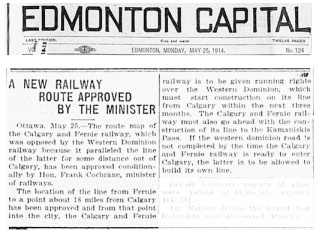 The final route began in Fernie, then north along the Elk River, east to about Millarville, then north through the Tsuut’ina reserve and into Calgary via what is now Oarkridge and Palliser.

Despite spending over $400,000 and clearing 29 miles of the 159 mile route by 1930, and despite the reported claim that the company was ‘ready to proceed immediately on the laying of steel’, the charter for the Calgary and Fernie Railway expired in 1932 and the line remained unbuilt.

The Calgary and Southwestern Railway Company was founded in 1918 by prominent Calgary businessman, and later Canadian Senator, Patrick Burns. In the early 1900s coal was discovered in the Sheep River area of the Alberta rocky mountains, and between about 1908 and 1913 Burns had invested in coal mining operations there. The company was seeking to establish a narrow gauge railway line, also known as the P. Burns Coal Line, to convey the extracted coal into Calgary. Surveyed in 1918, the line followed a similar route to the Calgary and Fernie Railway within Alberta, though the use of a narrow gauge line would seem to have precluded the requirement to share the tracks with either of the other two lines where they paralleled each other. 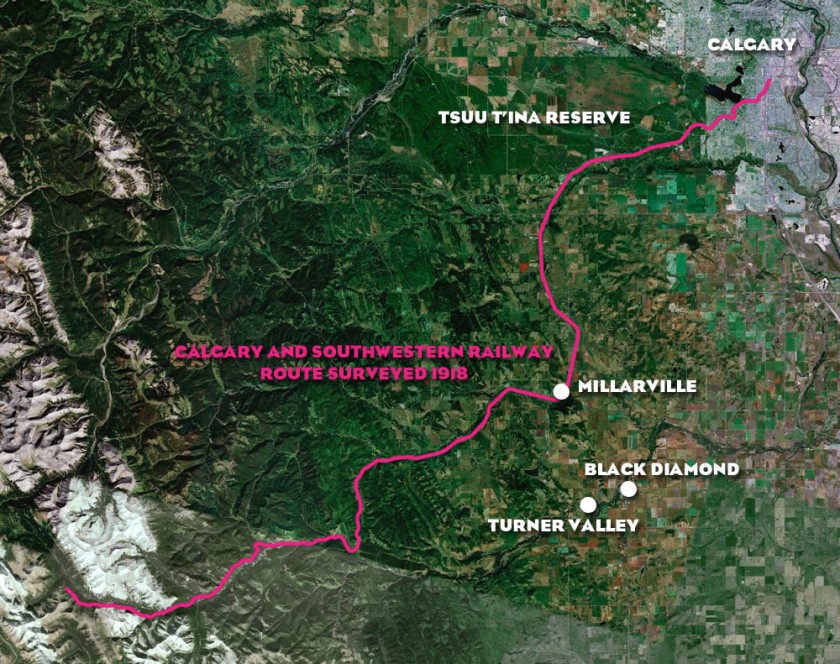 The line was set to exit Calgary through the future community of Cedarbrae, then head southwest through the Tsuut’ina reserve, south towards the Millarville area and then southwest along the Sheep River. The 100 foot wide railway right-of-way would have required almost 93 acres of reserve land, and the removal of one house from its projected path.

The railway line had been the subject of charter extensions well into the 1950s, though these renewals came with concerns that no progress was being made in actually constructing the line. A request was made in 1927 by Provincial Liberal leader Joseph Tweed Shaw that the company be required to put up a bond to ensure construction of 10 miles of track. This was criticized by the Minister of Agriculture, who noted that while 10 miles of track would pledge the company’s intentions, it “would not get it beyond the Sarcee (Tsuut’ina) reserve.” The line was noted to be useless without extending it the entire way into the coal producing areas of the Province. 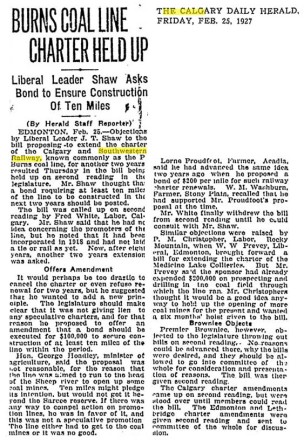 Though track was never laid, some use would be found for the line; according to “Gillean Daffern’s Kananaskis Country Trail Guide”, part of the current Alberta Highway 546 along the Sheep River was built on the otherwise unused Calgary and Southwestern railbed.

The End of the Line

Though ultimately these railways were never built, their stories are reminders of how long the Tsuut’ina reserve has been seen as an important location in regards to Calgary’s transportation needs. Perhaps it is no wonder that the increase of road-based transportation has meant that plans for rail crossings of the reserve have given way to plans centred around Provincial highways. The Tsuut’ina reserve has long featured in many local and regional transportation projects, and the Southwest Calgary Ring Road remains the latest in a long line of plans to cross the reserve.

4 thoughts on “The Railways of the Tsuut’ina reserve”